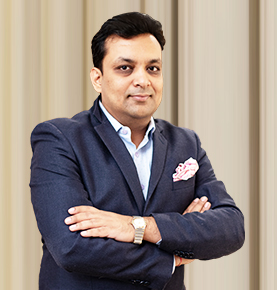 Shri Vikas Jhajharia, son of Shri Vimal Jhajharia, has been helping to spread the knowledge of Vastu after completing his MBA from La Trobe University, Melbourne, Australia. Being pious towards his ancestor's heritage, Mr. Vikas has also the same intention of rendering Vastu solutions without any modifications to make one's life happier and peaceful.

Mr Vikas has learnt Vastu both from his Father Vimalji and Grand Father Mr N.K. Jhajharia from early childhood. Being the third generation in the family, he has from past many years accumulated a huge vastu practical experience base along with his family's prestigious knowledge to render the best possible solutions to any vastu problems. He has been blessed by his Holy Guruji 1008 Swami Murghanandji and therefore works under the illustrious path shown by the Guruji.

Both Mr. Vimal and Mr Vikas have been regularly traveling all over the world and delivering their lectures on Vastu modifications without any kind of demolition. They also keep on conducting workshops and seminars on the same. They have been felicitated several times for their outstanding knowledge on Vastu and have also won several awards of national and international repute.

Vimalji and Vikasji have provided consultation on major projects from inception to finish stage as well as for projects already in operations. They are currently providing consultancy in more than 25 countries across the globe including USA, UK, Australia, Canada, China, HongKong, Singapore, Thailand, South Africa, UAE, South America, etc.

Under the able guidance of Shri Vimal Jhajharia and Shri Vikas Jhajharia a team of scholars work on the Vastu corrections remedies regularly. In VastuKalp Kendra, scholars do research work on the various old testaments, Vedas and other ancient mythological scripts, trying to find the various impacts of ancient pictures and holy signs on human life, which are still a mystery. Thus, always providing effective and cost reducing Vastu remedies.

Subcribe to our Newsletter